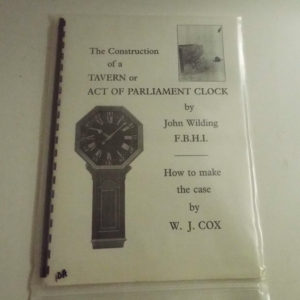 TAVERN OR “ACT OF PARLIAMENT” CLOCK—This type of large wall clock is often seen in churches, village halls, schools, etc. It should maintain accuracy within five seconds a week and runs eight days.

We offer free cUSA shipping on order over $399 and pay 1/2 of the International shipping costs.  We generally ship by USPS.com as opposed to UPS or FedEX.  UPS  and FedEX use more conveyor belts for sorting packages and glass does not like to be dropped from conveyor belt to conveyor belt.  We have been packing and shipping for over 25 years and have better than 95% safety record.  We guarantee to get the order to you in one piece.